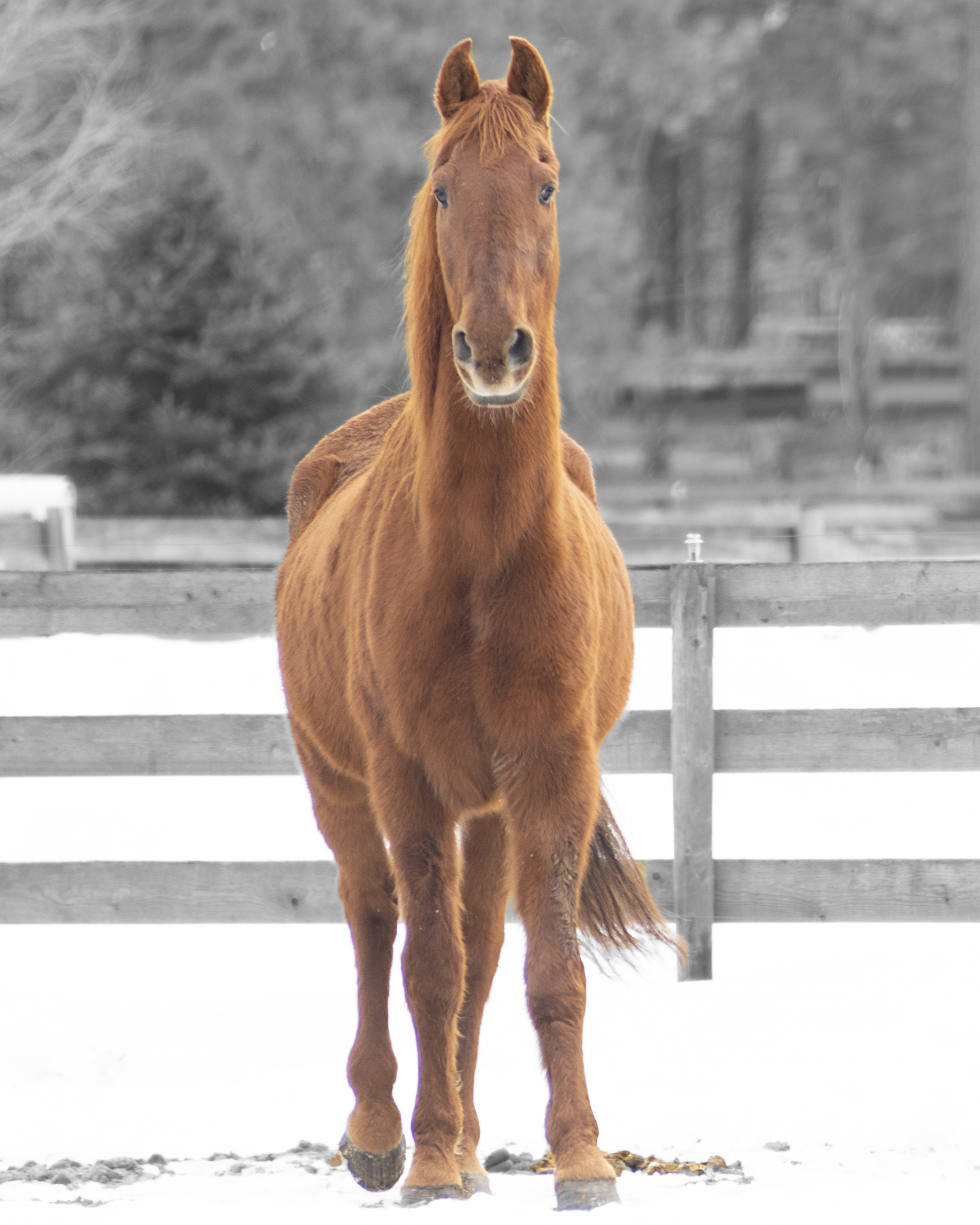 The first priority when looking at a horse is to determine if it is balanced. To begin with, the horse should carry equal weight on his front end and back end and on his topline and underline. This is determined by the skeletal structure of the horse allowing for correct proportion of the horse's parts. The neck, shoulder, back and hip should all be approximately equal lengths and the horse's topline should be shorter than its underline

A common flaw that negatively affects the horse's balance is a back that is long in relation to the neck and hip. An important ratio to consider when analyzing balance is the ratio of the topline to the underline. The topline is measured from the withers to the point of coupling. The underline is measured from a point under the belly between the horse's front legs to a point roughly even with the stifle (Figure 2). The topline should always be shorter than the underline in a balanced horse. A longer topline indicates that the horse has a long, weak back, which is often problematic due to long backs having weaker muscling. Longer back length also makes it difficult for the horse to bring its hind legs up under its body when it moves. The hind legs reaching under the body are the source of power for the horse to move forward and also allow the horse to maneuver and adjust easily. If a horse is unable to bring its hind legs well underneath its body, more weight must be carried on its front end, thereby reducing its power and maneuverability as well as leading to a more jarring impact for the rider.

Another important yet easy to determine criterion of balance is hip and wither height. Hip and wither height should be approximately the same. Often, a horse can be slightly "uphill," or higher at the withers, without being penalized. If a horse is "downhill," or lower at the withers than at the hip, the horse will carry more weight on its front end and lack maneuverability and driving power from behind (Figure 3). Carrying too much weight on the forehand can also lead to future lameness of the front legs. However, when evaluating young horses, it is important to remember that they will grow faster at the hip than at the withers; therefore, a young horse (e.g., horses showing in weanling, yearling, or 2-year-old classes) may be downhill as it is growing but may catch up as it reaches maturity.

Another consideration that can be grouped with balance is depth of heart girth. Depth of heart girth is not quite as critical to a horse's balance but is considered in this section since it is an important measure of the body's capacity to house the heart, lungs and other vital organs. It is desirable for the horse to have a deep heart girth. When drawing a line from the withers to the chest floor, this length should be approximately the same as the distance from the chest floor to the ground and should be greater than depth of flank.

Proportions to consider when determining balance

The slope of the shoulder greatly influences the look of the horse's neck. A horse with a steep shoulder often has withers that tie into the neck much farther forward than a horse with a good shoulder slope, which leads to a shorter neck topline and a longer back. Such a horse will typically have a shorter stride coupled with more weight on its front end due to its longer back. A short neck is typically an undesirable characteristic because it causes the horse to lack flexibility of the neck, as well as typically being associated with a steep shoulder angle. Another important consideration when examining the horse's neck and shoulder is the point where the neck ties into the chest at the shoulder. It is preferred that the horse's neck tie in high to its chest to allow for greater slope to the shoulder and a neater, more refined neck. If the horse's neck ties in low, the neck tends to be much heavier at the base and the shoulder is usually straighter (Figure 6).How the neck ties in to the shoulder also tends to also influence the shape of the horse's neck. An important ratio to consider when evaluating a horse's conformation is the ratio of the top of the neck to the bottom of the neck. The topline of the neck is measured from the poll to the withers and the underline is measured from the throatlatch to the shoulder junction. The ideal ratio would be a 2:1 topline:underline ratio. This allows the horse to have a more sloped shoulder since the withers will be set back well behind the point of the shoulder and also allows the horse to flex at the poll and carry his neck in a slight arch (Figure 6a). A horse that has a longer underline than topline is said to be "ewe necked." This is a very undesirable conformation trait as it typically is associated with a straight shoulder and a lack of ability to flex and lower the head .

One other ratio that is important to consider when looking at the horse's neck is the ratio of the throatlatch to the length of the head. The throatlatch is measured from the poll to the windpipe and should be roughly half the length of the head as measured from the poll to the muzzle. If the throatlatch is longer and thicker than this, it restricts the horse from flexing at the poll. Horses with deep, coarse throatlatches can possibly have trouble breathing when asked to flex their head towards their chest. This also detracts from a refined show quality appearance.

Finally, the length and turn of the hip is also critical to a horse's athletic ability. In general, larger hips are better since they provide more power and musculature to propel the horse forward and carry its weight. Almost all disciplines of riding have maneuvers that require power and adjustability.The larger and better shaped the hip is, the more power the horse will have. A horse's hip should be approximately the same length as its back. It is also important to consider the way the hip is shaped. The horse should ideally have a "nicely turned" hip and croup. The slope of the hip should be roughly the same as the slope of the shoulder. A horse with too flat of a hip will have trouble bringing its hind legs under itself, while one with too steep of a hip (a "goose rump") will lack the range of motion to provide power to the horse's movement. Additionally, the hip should tie in low to the gaskin muscling (muscling of the upper leg).

How important is the head when looking at balance?

The major function of the head, apart from essential purposes such as breathing, eyesight, etc., is to serve as a pendulum to balance the horse as it moves; therefore, it is critical for the head to be proportionally sized to the rest of the horse's body. The horse's head is heavier in proportion to the length of its neck than any other animal in the world and weighs, on average, 40 pounds. If the neck is the proper length and the head is proportionally sized to the rest of the body, it can function as a balancing aid for the horse's movement. A classic example of this is the lame horse "head bobbing." When a horse has lameness or injury to a front leg, it limps by using its head to pull his body upwards; it lifts its head and pulls in the opposite direction of the injured leg. When it is lame in a hind leg, it will limp by lowering its head and pulling in the opposite direction of the back leg. In both instances, the head is acting as a pendulum to take weight off of the injured leg. Since the horse uses its head for balance, it is critical that the weight of the head be in proportion to the body. When a horse has too large and heavy a head, it tends to be unable to move weight off of its front end and therefore lacks in athletic ability. Although the "ideal" head will vary somewhat among breeds, a few basic principles pertaining to the size and shape of the head are fairly universal. The distance from the poll to the midpoint between the eyes should be half the distance from the midpoint of the eyes to the midpoint of the nostrils. In other words, the eye will be positioned at about one-third of the distance from the poll to the nostrils. Also, the width of the horse's head from the outside of one eye to the outside of the other should be approximately the same length as the distance from the poll to a horizontal line drawn between the eyes. This width is important to provide room for the brain and also for sinuses, tear ducts and breathing canals located beneath the skull, as well as being aesthetically appealing.

Common structural characteristics of the head that are generally faulted are the Roman nose and the platter jaw. A Roman nose describes a condition in which the front of the horse's face is rounded outwards as opposed to being flat (Figure 10). This usually does not affect the use of the horse other than it is not as attractive and often adds weight to the horse's head. A platter jaw is condition that describes excessively large jaws on the horse. It also detracts from a refined look and is undesirable because it adds weight and interferes with the horse's ability to flex at the poll. Other important considerations when examining the head are nostril size and eye size and shape. Nostrils should be large and round to allow maximum intake of air when the horse is working hard and breathing heavily. It is also desirable for the horse to have large, dark eyes set far apart and to the outside of the head to allow for good vision. It is important to understand the horse's field of vision in order to understand why eye placement and size is important. Horses have more developed monocular vision than binocular vision. The horse sees a different picture out of each eye (monocular vision) very well but has more limited binocular vision (seeing the same picture in both eyes of what is directly in front of it). Because of these factors, horses with small eyes or eyes that are too close together are faulted because their field of vision may be more limited.

While it is important to be able to evaluate the horse's head, both for proportionality as well as refinement, it is equally important to recognize that the head is not as critical as other previously discussed proportions when determining balance. Refinement and attractiveness of the head should never take precedence over other measures of balance or structural correctness.